At the Godin Tepe site (north of the Zagros Mountains on the Iranian-Iraqi border, valley of Kangavar, province of Kermanshah), a shard of jar revealed the presence of calcium oxalate ions in the yellowish residues of its grooves. This signature of alcoholic fermentation, together with the charred barley grains discovered in the same room of a fortress, clearly demonstrates the purpose of this jar dated 3500-3100 BC: a beer jar. [1].

The buildings and rooms grouped around a central space and encircled by curvilinear walls evoke a small citadel or an isolated trading post of the lower town in the valley. The material recovered within this protected area is similar to the crops of Lower Mesopotamia and Susiana, whereas in the rest of the town it is of local inspiration. Room 18 contained, next to the beer jar and barley grains, almost 2000 small spherical stones obviously intended for calculations or trade. The economic and political relations between the people of the valley and those who lived on the protected settlement are the subject of much research and debate[2].

Established along one of the roads linking the Mesopotamian plain to the Iranian plateau via the Kangavar valley, Godin Tepe was home to a trading colony or local elite influenced by the southern cultures of Sumer and Susiana. The expansion of this so-called urukean culture[3] began between 4000 and 3800 BC. 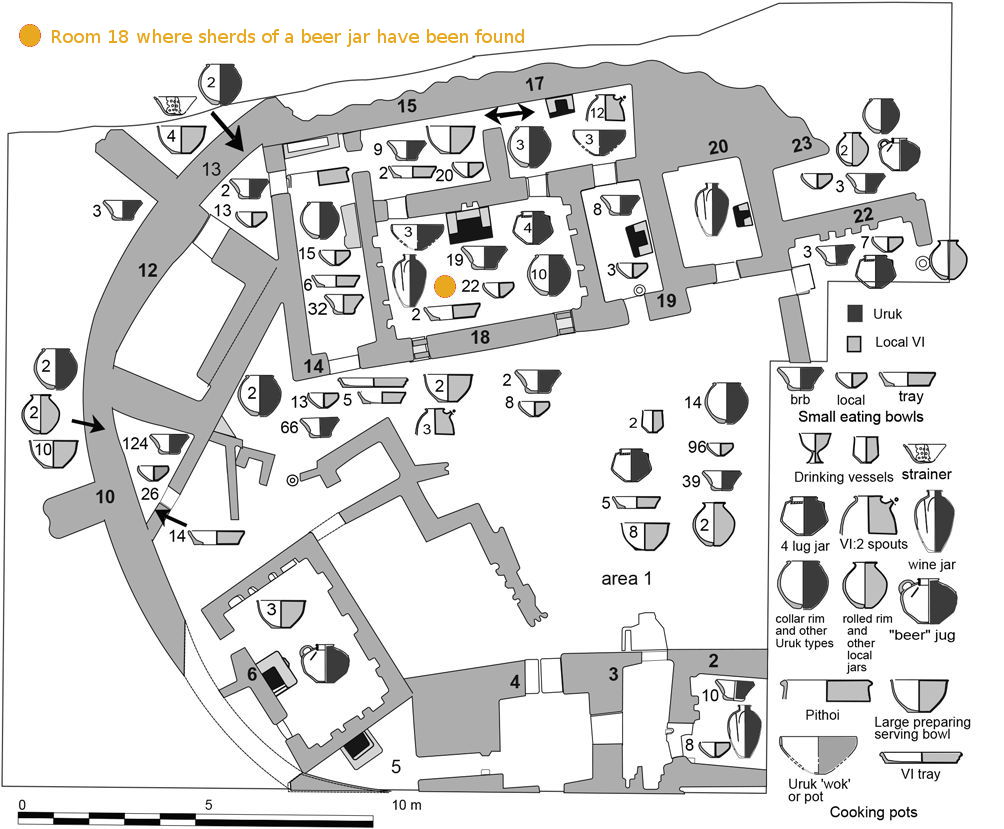 The shard which bore traces of calcium oxalate, a marker of the alcoholic fermentation of infusions based on grains (starch), made it possible for the first time to determine the presence of beer in an ancient archaeological context. The McGovern laboratory (MASCA) thus proved in 1991 that its methods and analyses could be of great help to archaeologists who until then had assumed the function of the vessels on the basis of their shape or the context of the excavations, with sometimes divergent interpretations. This detection of beer had been preceded and encouraged by successful analyses of wine jars at the Godin tepe site itself and other archaeological sites in the Middle East. This first success will be followed by several others, notably in China. Each time, the analyses will postpone the date of emergence of the first beer brews to reach, to today, an age of 13,000 years at Raqefet (ancient Jordan-Palestine).

[2] Mitchell S. Rothman (2013), Interpreting the role of Godin Tepe in the “Uruk expansion”, in ANCIENT IRAN AND ITS NEIGHBOURS, Cameron A. Petrie (ed.).
academia.edu/16714190/Interpreting_the_Role_of_Godin_Tepe_in_the_Uruk_expansion_

[3] According to the eponymous Sumerian city of Uruk, which in the 3th millennium will become the largest urban centre in the world.