In Christianity, the vine and wine have a particular place. The vine is used as a metaphor to describe the Kingdom of Heaven ("I am the true vine and my Father is the winegrower", John, 15, 1). The wine growers are those who will preach the new covenant (Matthew, 20,1-16). The wine stands for the blood of Christ, the bread for his body. This beverage and food are ceremonial (Eucharist, communion) and symbolic elements (gospels, epistle, sermons) that actualise the sacrifice of Jesus of Nazareth on the cross. The transubstantiation that takes place during the Mass " transforms " the bread and wine, concrete and worldly matters, into the body and blood of Christ. It realises and repeats what happened during Jesus' last meal. The Last Supper, often depicted in Christian art (here the mural painted by Leonardo da Vinci in 1490 in Milan, Italy). It shows Jesus surrounded by the 12 disciples and celebrating the evening meal during the Jewish Passover in Jerusalem.

The Christian Church is Eucharistic: it believes in the presence of Jesus Christ in holy communion under these two species, bread and wine. The Eucharist is a sacrament for Orthodox, Catholics, Anglicans and other Christian Churches. It is based on Jesus' last meal with his apostles, the sharing of bread and wine at the Jewish Easter in Jerusalem. The Last Supper is a founding moment: during a feast of the Jewish religious calendar, the traditional meal shared between Jesus' followers takes on another symbolic and religious meaning.

« Now as they were eating, Jesus took bread, and after blessing it broke it and gave it to the disciples, and said, “Take, eat; this is my body.” And he took a cup, and when he had given thanks he gave it to them, saying, “Drink of it, all of you, for this is my blood of the covenant, which is poured out for many for the forgiveness of sins ». 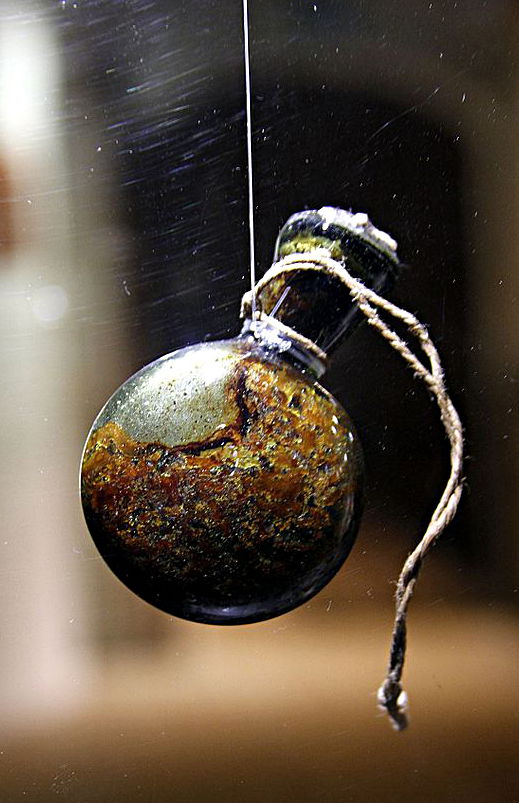 Reliquary of the Blood of Christ. Our Lady of Siena, 8thcentury.

Ukrainian icon from the 18th century.

The biblical origin of the Eucharist is placed in the context of the Jewish Passover, a feast commemorating the Hebrews' departure from Egypt (Book of Exodus). This feast was normally spread over 7 days. Today, this link is recalled each year on the occasion of the Easter liturgy: the links between these two feasts are therefore strong and relevant today.

The Jewish religion prohibits the consumption of fermented beverages during Easter (Pessa'h) and even any contact with a fermented product (Fermented and impure in the Jewish religion). The Christian Passover, on the contrary, puts the emphasis on the communal meal that closes this celebration. It is during this Jewish celebration in Jerusalem that Jesus instituted the Eucharist: « On the first day of the Festival of Unleavened Bread [the Jewish Passover, Pessah], the disciples came to Jesus and asked, “Where do you want us to make preparations for you to eat the Passover?” » (Matthew 26:17; Mark 14:12).