Traditional Bhutanese beers and the making of amylolytic ferments.

A 65-page study of Bhutan's traditional beers, their brewing methods, their economic and social role, with an overview of their history and a comparison with traditional beers from northern India.

Bhutan, a kingdom as big as Switzerland, born on the foothills of the Himalayas between two giants, India and China, harbours many treasures, some of them hidden, others for all to see. Among the later: the Three Jewel s of Buddhism , the Gross National Happiness, and an unusual way of brewing the traditional beer of Bhutan called chang. Blending religion, economy, and a fermented beverage may seem incongruous, even disconcerting. So let us take a closer look.

Since the invasion of Tibet by China in 1950, Bhutan has become a refuge for Mahayana Buddhism in its Tibetan version. Since the ninth century, Tibet and Bhutan have shared a common political and religious history, both complementary and conflictual . Buddhism is the official religion in Bhutan.

The Bhutanese produce their beer in rural villages in the heart of small fields of cereals and rice and drink it in their homes. They have been doing so for centuries. In Bhutan, where brewing is kept in women’s hands, the brewsters (women brewers) have developed skills inherited from the peoples of the Himalayas. The only requisites to brew beer are specific natural plants to produce the ferments, as well as cereals, water, wood for heating and containers. In addition, very precise expertise transmitted from mother to daughter is needed to master the delicate making of the beer ferments indispensable for the brewing of the domestic beer of Bhutan known as chang .

The technique involved in the making of beer ferments (or beer starter) is a real technological treasure. The Bhutanese brewer (better named a brewster) does not use yeast, industrial malt, hops, food additives nor chemicals - only plants from her mountain and forest environment (flowers, leaves, bark and dried roots) and grown cereals (barley, wheat, buckwheat, finger millet, rice and maize). The whole secret lies in the composition and making of the ferments. A treasure related to a biotechnology using the vegetal resources of the country. Cultivating microscopic fungi with amazing powers implies a more complex know-how than one can imagine.

Chang beer is also a cultural treasure in Bhutan. Beer plays a social role in all countries of the world. Friendship and anniversary parties are celebrated around a glass of beer, releasing tensions. Industrial beer does the trick in many countries whereas in Bhutan domestic beer brewed in farms or in large rural residences cannot travel or be bottled. It is the result of local production by and for a family or for a meeting with a few dozen people, brewed with local cereals and fermented with wild plants (ferments). Its taste and aromas change according to the season, the cereals available, the weather and the expertise of the brewers. This is the opposite of a bottled, standardized industrial beer, dedicated to trade and mass production. Chang is a treasure at risk because its future rests on that of the village communities. Their extended family structure and their mode of agricultural production suffer under the blows of globalisation and the forced modernisation of this small country .

Ultimately, chang beer is a religious treasure. Fermented drinks are alien to the Buddhist practice of lamas, monks and nuns. However, Tantric Buddhism accepts offerings of alcohol from the laity (Drukpa Kunley worship at the monastery of Chimi Lhakhang). The Bön rites, domestic offerings and collective festivals give also a key role to chang beer and ara distilled alcohol.

Replacing on the domestic altar the cup of beer brewed at home by a bottle of industrial beer or alcohol purchased in a store threatens the deep meaning of a religious offering. Buddhist devotion implies that an offering should come from one's own effort and work, resulting from a personal project as opposed to a factory-made product bought in a commercial store. An even more radical transformation takes place on a religious altar when a beverage made with the natural fruits of the earth is replaced by sodas made with chemicals. As a result of this kind of rapid cultural evolution, it is the gestures and realia associated with the Buddhist rituals that first lose their primitive religious significance for those who practice them, for example if the chang or the ara are superseded by industrial spirits. Soon after, the words and prayers themselves are slowly emptied of their meaning for those who recite them.

These are three main reasons, among others, for preserving the "Bhutanese-style of beer brewing", a unique tradition and expertise going far beyond folklore or touristic oddity.

Gallery of 2 maps and 1 video illustrating the traditional beers of Bhutan. 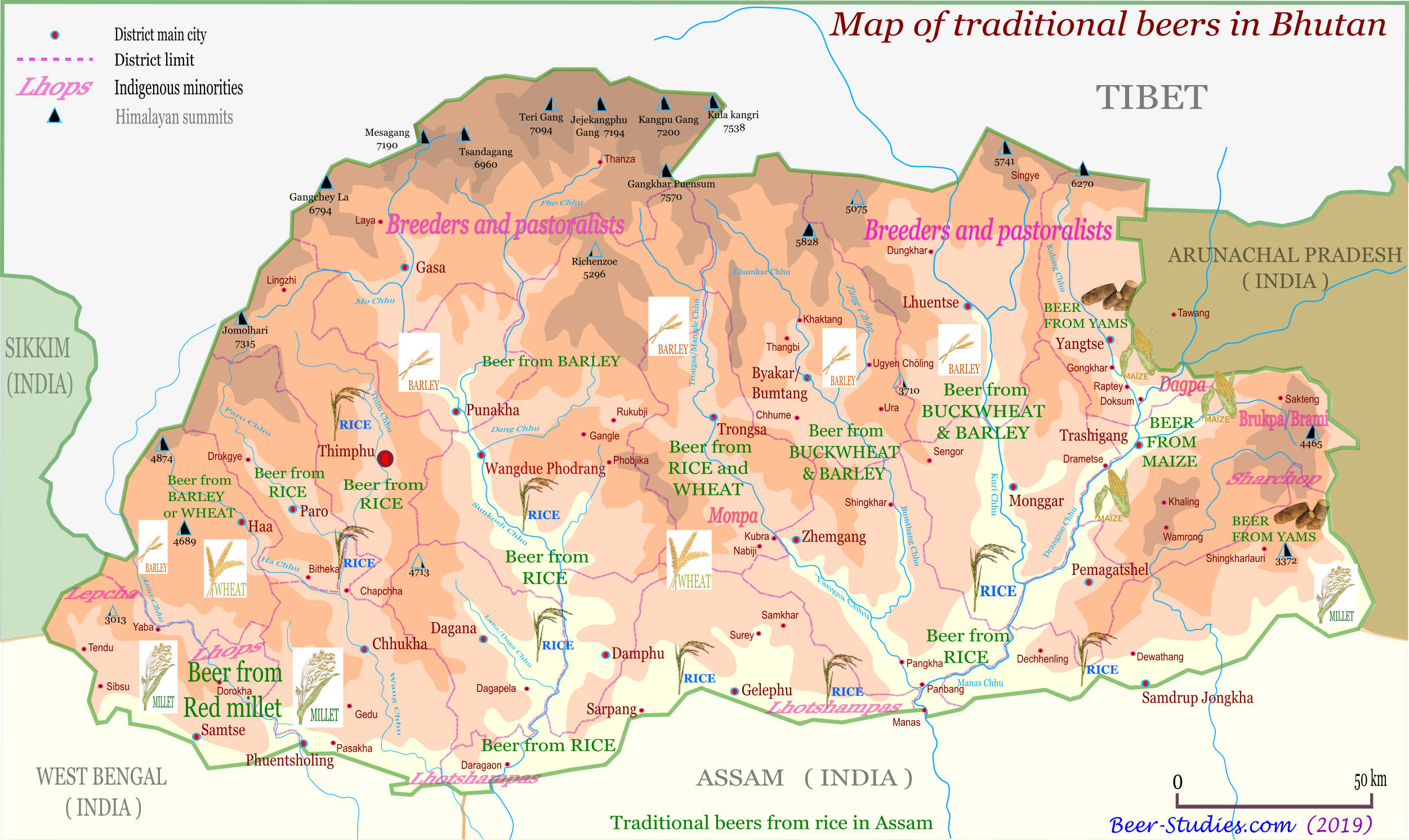 Making of beer ferments (phab) in a farm near Punakha (central Bhutan) in 2019. The woman brewer explains the steps of this traditional process preserved in Bhutan. The ferments, made with amylolytic fungi (they convert starch into fermentable sugars) are used to brew the chang-beer.

Map of the various kinds of traditional beer ferments used today in the Himalayan regions (excluding Tibet). The brewsters of Bhutan share this ancestral technique with the neighbouring countries of Northern India.