Exploring the historical time-space of beer

Brewing dregs and fermentations according to the DomostroïArticle 6 of 6

The Domostroï and the beer history in Russia.

Smith and David's study (Bread and Salt, 1984) sets the Domostroi in a broader historical context. Smith reconstructed the major food developments in Russia since the 13th century as follows: 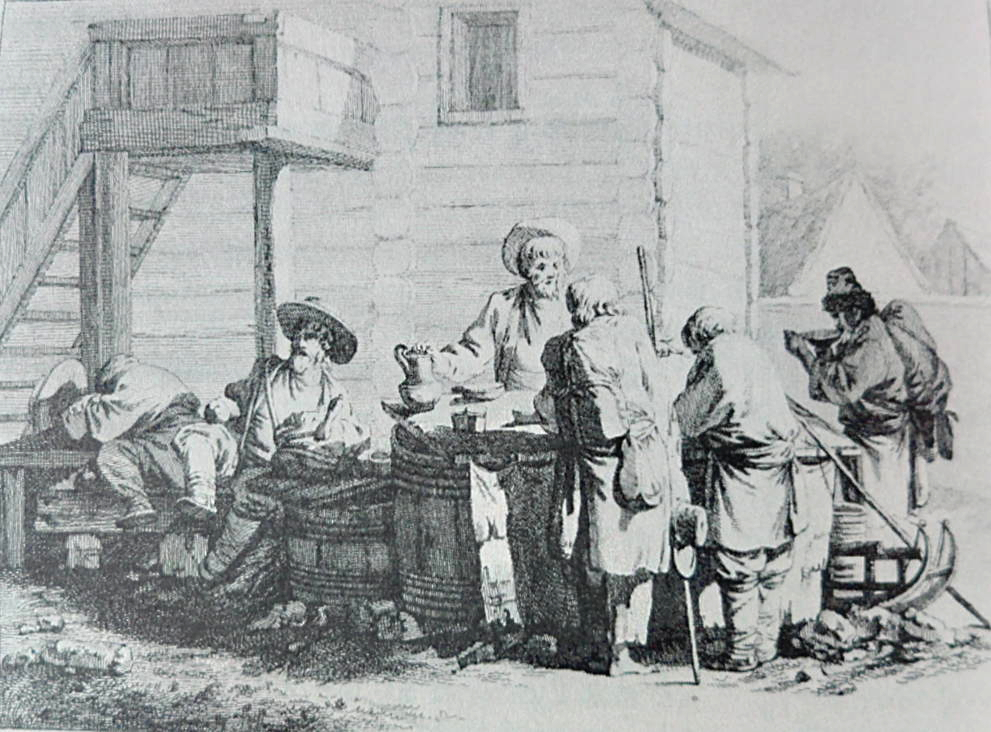 Sale of kvass within a Russian village in the 17th century.

Distillation of beer in the 16th. The western attire is significant.

Muscovy, its brewing traditions (kvas, braga and pivo) from 10th to 16th centuries, a country between the Tatars in the east (fermented mare's milk) and the Hanseatic cities in the west (barley beer). Developments in brewing techniques and population movements.

From the 18th century onwards, social and technical developments profoundly changed the picture depicted by the Domostroi. They are beyond the scope of this presentation.

As a provisional summary, the range of fermented beverages in Muscovy has been very wide since the 12-13th centuries. Honey and grains are the main ingredients, secondarily berries and fruits. Rye, oats, and buckwheat, which are used for brewing, are the cereals of the poor soils before the Russian Empire extended its domination in Ukraine and the Khanates of the northern Black Sea during the 17th century. Nevertheless, the nobility and boyars drank beer (pivo) made from barley or wheat, in addition to mead.

The brewing techniques favour the acid hydrolysis pathway. This implies that grain malting is not the main brewing method, at least in the farmers' world. Kvas and braga bear witness to this. The composition of these two rye-, buckwheat- or oat-based beers may also incorporate barley or wheat, also berries and fruits, even honey. Rye malting was practised in connection with the brewing of kvas and braga, and later to convert rye malt into beer for distillation. There are no typical recipes for kvas and braga. This is the common characteristic of all domestic or farmhouse beers in the world. One brews with whatever ingredients is at hand, depending on the harvest, the grain supply, the wealth or poverty of the household. The seasons offer their fruits, berries, roots and achenes, all of which are picked and collected, bounties that escape the prevarication of the state agents. All this goes into the brewing pot of braga and kvas, whose flavours, degree of fermentation and appearance vary from season to season, from day to day, and even from hour to hour. Homebrewing is intended for immediate consumption, which does not preclude means of preservation through ice or certain antiseptic plants. The technical boundary between braga and kvas is therefore not easy to draw.

Moreover, the differences between mead, beer and wine are more than blurred among Russian peasants, even though the primary ingredient is still grain starch. The borderline between fermented beverage and soup is also blurred. This seems to be a characteristic of the popular foodways of Central and Eastern Europe in the Middle Ages, subject to further study in Russia's neighbouring countries.

Kwas and braga are at the crossroads of several worlds: honey and poor cereals from Eastern Europe, dairy products from Central Asia (koumys), acidic soups from the Baltic and Siberia (vegetables, berries, mushrooms, roots, acidic fruits), and finally the tradition of malting of cereals from Central Europe and Scandinavia.

Kwas and braga are also in the mid-17th century, after the time of the Domostroi, the result of historical sedimentations that added to these two domestic and ancient beers new alcoholic beverages (pivo, wines, spirits), first fermented and later on distilled. These far-reaching developments have affected the role, the brewing techniques and the nature of braga and kvas. This will not prevent kwas from passing through the next centuries and still being brewed today both as a domestic beer, a farmhouse beer, and a semi-industrial beer.

[1] The two armed troops had been camped for three months in the winter of 1016 facing each other on both banks of the Dnieper, which was beginning to freeze. The supplies of honey and mead were running out. A servant of Yaroslav secretly goes to question a friend from the opposite camp: "‘What dost thou advice to be done now ? There is but little mead brewed and the Druzhina (the boïars' group joined to Yaroslav) is large’. And that man said him: ‘Say thus to Yaroslav, if there is little mead but a large Druzhina, then give it in the evening.’". Yaroslav understands that he must cross the frozen Dnieper and attack that evening. This tells us that mead was the favourite and honourable beverage of the warlords and free men of that time.

[3] All Western European and American societies had the same problem in the 18th and 19th centuries. A state that derives its income from the encouraged production and sale of alcohol, mostly distilled spirits, and the poorer social classes that sink into alcoholism.

Brewing dregs and fermentations according to the DomostroïArticle 6 of 6