The beer ferments from Dingcun in China 6,500 years ago.

The use of beer ferments during the Neolithic period is the subject of exciting researches in China. This technology is the main brewing method used today throughout Asia and in China for thousands of years. But since when exactly? 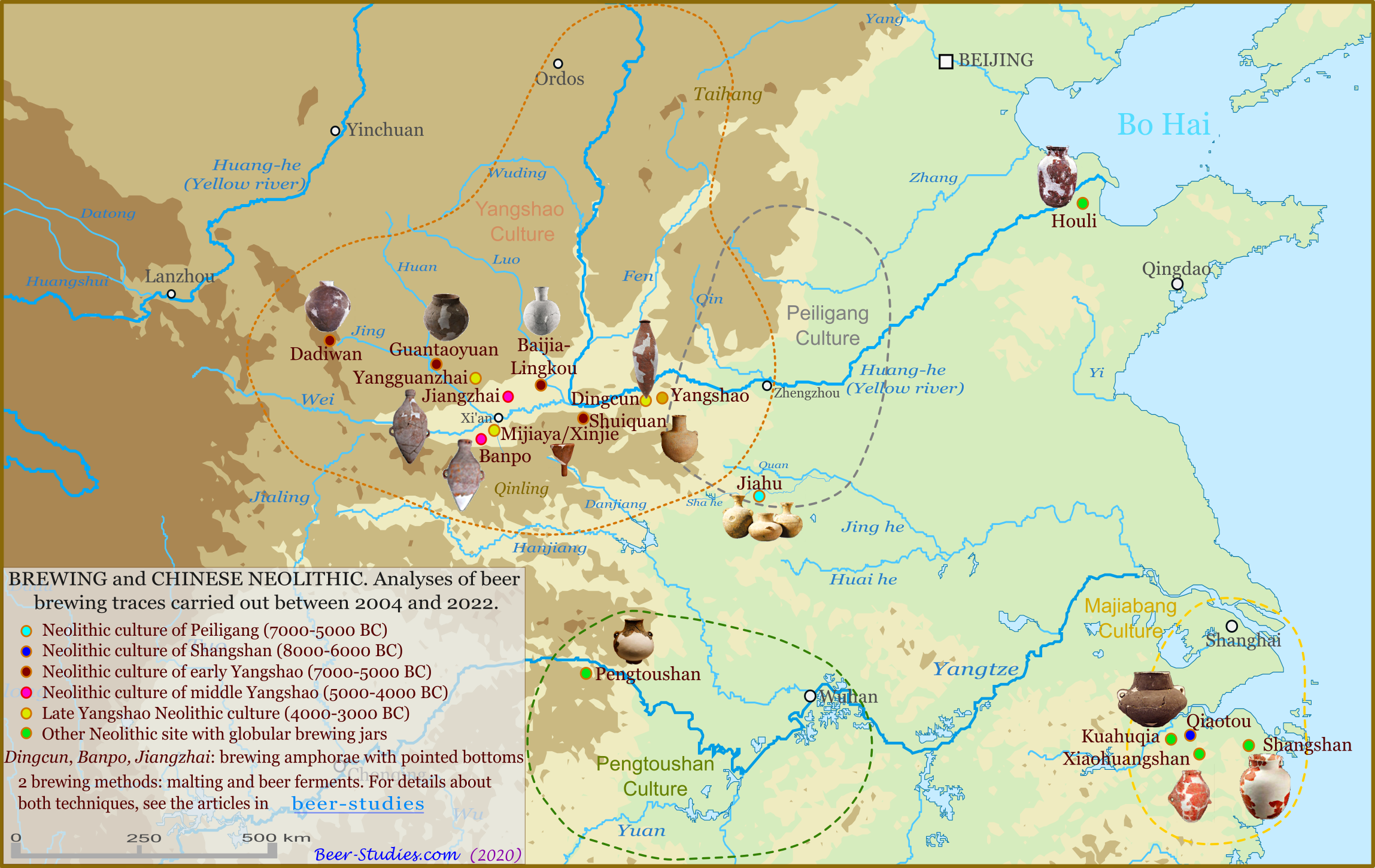 Location of Dingcun and Neolithic sites related to beer brewing in China.

In 2020, a team of archaeologists proved that these beer ferments were used in Dingcun, a Neolithic site of the Yangshao culture (4500-3000 BC). This is the culmination of much researches to improve the detection of traces of brewing in the Huang-He river region. They mainly target the remains of starch granules that were modified by the brewing process, of phytolites, of calcium oxalate and now the remnants of microorganisms (fungi, yeasts, bacteria) involved in the saccharification of starch and the alcoholic fermentation[1].

Beer ferments ? What are we talking about? Some fungi and moulds (Rhizopus, Aspergillus, Mucor, Monascus, etc.) release enzymes that convert starch into sugars. A godsend for brewing beer, because the brewing process always starts with this compulsory operation without which no alcoholic fermentation of the starch could take place. Unlike the sweet juice of fruit, starch does not ferment spontaneously. We grow these precious microscopic fungi on cooked grain patties, let them multiply in a hot, humid, aerated container, then dry these same patties. These are what we name beer ferments. They are a concentrate of amylolytic mushrooms inside a dried cake that can be kept for months. When it's time to brew the beer, one or more dried cakes (or beer ferment) are simply well mixed with a full batch of cooked starch from any origin (grains, tubers, seeds). The brewer let the mushrooms do all the work. They will simultaneously make the sugars from the cooked starch and convert them into ethanol during one and single biochemical process. When time comes to enjoy the beer, water is added to the fermented mash in order to dilute it and get an alcoholic beverage, either filtered or not.

Westerners, who are used to thinking beer = malt, always wonder how such a brewing method can work. It has been used in Asia for at least 6,500 years!

This dating is one of the outstanding results achieved by Li Liu's team.

On the Dingcun site, 10 km from Yangshao, 9 shards from the Miaodigou phase (4000-3500 BC) were collected. The analysis was carried out on 149 starch granules, 540 phytoliths and 180 organs of microscopic fungi.

The identified plants are similar to those of Mijiaya, except that barley, yam and lilies are absent: broomcorn millet(Panicum miliaceum), foxtail millet (Setaria italica), Job's Tears (Coix lacryma-jobi), and Snake-gourd (Trichosanthes kirilowii). Rice (Oryza sp.) has also been found (Liu et al., 2014). Finally, grasses such as Agropyron, Elymus, and Leymus from northern China (Wu et al., 2006). Neither barley nor wheat.

Among the 180 fragments of fungal organs, the following were counted: yeasts (49), hyphae (86), mycelia (6), sporangia (3), sporangia with sporangiophores (14) and spores (8). The yeasts are morphologically close to the strains of wild Saccharomyces cerevisiae identified in northern China and occurring nowadays in millet beer brews. The identification of the mold species provides a clue to the ancient beer brewing methods: Mucor sp and Aspergillus oryzae. The presence of these microorganisms on shards of pottery used for brewing beer and their association with yeasts leaves little doubt. Their presence is not accidental. Aspergillus are nowadays cultivated on beer ferments in China, Korea, Japan and many Asian countries to brew many different kinds of traditional beers.

This is the first time that these microorganisms associated with beer fermentation technology have been identified for such a remote era and in a region that is one of the world's major brewing areas. Very ancient traces of yeasts such as Saccharomyces cerevisiae have already been found in the world. But these yeasts are involved in the alcoholic fermentation of every sugars. On the other hand, Mucor sp and Aspergillus oryzae are linked to a specific brewing method. Li Liu's team not only found and dated traces of an old beer, they also showed that the brewing technique using beer ferments is itself very old.

This technique coexisted in the Neolithic period of Dingcun with the malting technique. Some millet starch grains show signs of germination prior to cooking and fermentation, as in Mijiaya.

It can be argued that the two main brewing techniques, the beer-ferments and the malting, have coexisted for many millennia in northern China and probably over a much wider geographical area. This information is far-reaching:

The significance of these discoveries is of the greatest interest for the history of the brewing. Li Liu sums them up as follows:

« Our results provide convincing evidence that amphorae at the Dingcun site were part of alcohol production facilities. The Yangshao people there made fermented beverages with millet, rice, Job’s tears, wild Triticeae grass seeds, as well as snake gourd roots. They employed two techniques of fermentation, using malts and qu starter. The malts were probably made of sprouted broomcorn millet, Triticeae seeds and rice, while qu may have been formed with moldy grains together with herbs. »[3]

Some cereals are well suited to malting, others are not, such as rice. This difference and the growing importance of rice cultivation in China may explain the gradual dominance of beer ferments in Chinese brewing methods. This remains an open question for future research.

[2] In fact, malting continues in northern China with the domestic brewing of millet beers. Hunjiu beer is brewed nowadays in Shaanxi with corn malt mixed with raw millet. The brewing method is hydrid in the sense that the thick mixture is left in a pot to both its conversion into sugars (malt action) and its alcoholic fermentation (yeast or other fungi). This semi-liquid phase is followed by a liquid phase when the beer is drunk by adding water to the brewing pot. Note the intervention of maize, a cereal that arrived late in China through contact with the Spaniards in South-East China. Evidence that domestic brewing methods are constantly changing around the world. Li Liua & al. , The origins of specialized pottery and diverse alcohol fermentation techniques in Early Neolithic China, 2019, pnas.org/cgi/doi/10.1073/pnas.1902668116 Supplemental data p. 10.

[3] Liu Li & al. 2020, 8. It is not clear whether paddy rice is suitable for malting. Harvesting the grains of rice often removes the germ. Rice can only germinate if all its husks and glumes are undamadged. This remark does not lessen in any way the relevance and pivotal importance of these investigations.