Explore the historical space-time of the beer

The Amerindian brewers peoples of the Rio de la Plata in the 16th century.

A region of the world has been little studied in terms of its brewing history and traditional beers, as they existed before the arrival of the Spanish and Portuguese. This is the southern part of Latin America, more specifically the regions that currently correspond to Argentina, Uruguay, Paraguay and southern Bolivia, i.e. almost a third of South America.

This region is densely populated, especially in its northern half, when the first Europeans sailed along the Amerindian shores and rivers at the beginning of the 16th century. The diversity of Amerindian cultures and societies echoes the contrasts of climate and geography. Some ethnic groups live by hunting, fishing and gathering. Others have become complex and hierarchical societies of sedentary farmer-breeders.

These Amerindian societies invented many techniques to make various kinds of beer. Their agricultural prosperity, based on the cultivation of maize, cassava and sweet potatoes, made it possible to create a true brewing tradition, long before the Europeans invaded the coasts of South America. Beer was the main fermented beverage of these Amerindian societies, especially the most complex of them. Beer also seems to have played an important social role, albeit in very different ways, depending on the mosaic of so many different peoples. The customs related to beer and brewing are unfortunately very poorly documented.

After the first reconnaissances by Juan Diaz de Solis in 1516, Sebastian Cabot in 1525, and Diego Garcia the following year, a great Spanish expedition led by Don Pedro de Mendoza went up the Rio Paraná and its tributaries in 1536. In less than 20 years, successive Spanish captains explored a vast area. It stretches from the mouth of the Paraná to the upper reaches of Paraguay, almost 2000 km as the crow flies. Their troops of some 200 to 400 mercenaries come into contact, village after village, with a large Amerindian population.

Depending on the ecosystems - forest, pampas, sierra, floodplains - these Amerindians are maize growers, cassava and sweet potato horticulturists, carob beans pickers, or honey harvesters. They know how to make different kinds of beer. Maize beer for farmers, cassava or sweet potato beer for horticulturists, carob beers for hunter-gatherers, sometimes all four kinds within the same people, depending on the season.

The accounts of these early contacts describe Amerindian cultures that are more evolved than is usually presented[1]. Sedentary peoples coexist with semi-nomads. Peaceful cultures coexist with warlike peoples fiercely jealous of their freedom like the Querandis and the Charruas, or the Puelches and the Mapuches further south. The Diaguitas, Achkeres and Xarayes live in the North-West of present-day Argentina and Bolivia. They have been exchanging for centuries with the Inca cultural space of central Peru. On the contrary, the Chonik, the Aoninkenk or the Onas are more isolated peoples of Tierra del Fuego, bearers of very rich cultures based on hunting, fishing and gathering.

From the Gran Chaco in the north to the extreme south of the Tierra del Fuego, the cultural contrasts are striking in the 16th century. 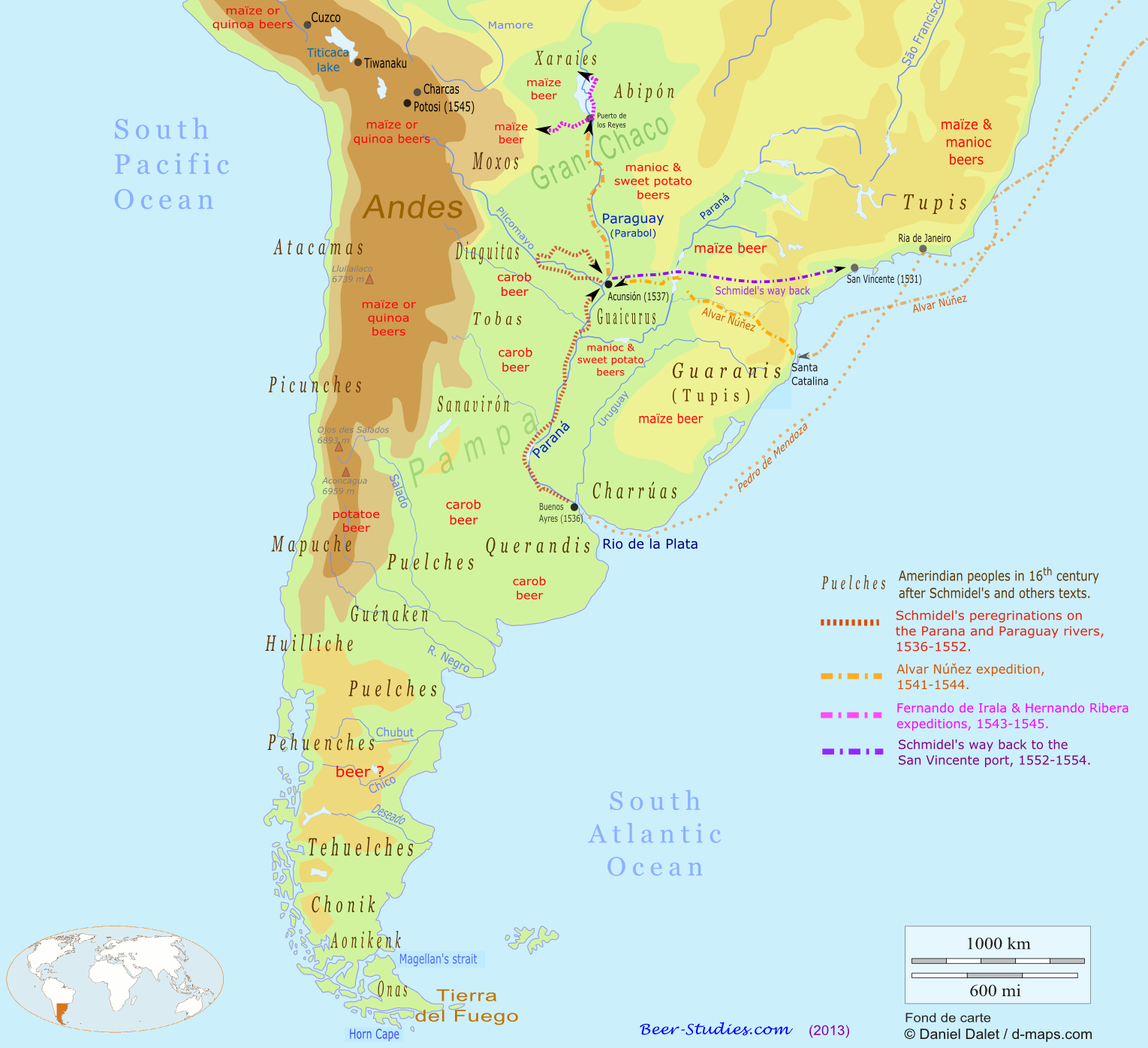 The Amerindian peoples of Paraná, Paraguay and Patagonia in the 16th century, and the types of beer associated with them.

What do these Amerindian peoples have to do with the history of beer?

First of all, they have been brewing beer for many centuries and have been farming maize, manioc or sweet potatoes. This verifies the existence of a close relationship between the Amerindian beer brewing traditions and an economy based on the cultivation of starchy plants before the colonial times.

However, the diversity of the social structures described by the early European colonisers shows that the role of beer changes in line with the social complexity. This historical situation makes it possible to deepen the analysis of Amerindian beer brewing traditions. An economy based on starch-rich plants is a material prerequisite. But in turn, the level of social complexity influences the development of the brewery.

Beer is a reliable indicator of the technical level reached by these Amerindian peoples, the degree of evolution of their societies and their cultural development. It reveals the various degrees of social complexity reached when the Spaniards went up the rivers Paraná and Paraguay towards the Gran Chaco and the Andean foothills.

The Rio de la Plata draws a cultural and geographical border between North and South.

To the north of the Rio de la Plata live complex Amerindian societies partly settled along the rivers.

In the south of the Rio de la Plata live Amerindian societies of hunter-gatherers living in the pampas.

The north of the Rio de la Plata is the world of sedentary farmer-breeders clustered in villages and forming more or less extended communities. The brewing of maize, manioc or sweet potato beers is the rule. Its technique does not pose any major technical problems, although accounts from the 16th century give only rare descriptions of it. What we know about Amerindian maize beers at that time comes from accounts of the conquest of Peru and Venezuela, two historical and geographical areas far removed from the Rio de la Plata and Gran Chaco. We assume that these regions share the same brewing techniques, but there is no evidence to support this assumption.

The troops commanded by the Spaniards, landed at the Rio de la Plata, went up the rivers. The further northwest they went, the more they encountered complex social structures: tribes of hunter-gatherers in the lower reaches of the Paraná, then settled cultivator-horticulturists in villages and members of vast ethnic groups subject to the authority of a cacique (Carios, Paiembos), and finally, on the upper reaches of the Paraguayan river, societies of farmers organised as a confederation of ethnic groups serving a dominant ethnic group. This last situation prefigures vast stratified social constructions linked by a central political power emerging in a region that coincides with present-day Bolivia. These Diaguita confederations will resist almost a century by arms to the Spanish conquest. They are organised on a large territorial and political scale, able to mobilised armed troops against the Spanish whose goals are to join the newly conquered andean territories by the Pizarro family and their captains.

To the south and west of the Rio de la Plata begins the pampas. There is little cultivation of maize, cassava or sweet potatoes, except in the regions bordering the rivers and the Andean foothills to the west. But another source of starch is available spontaneously: the floury pulp of the Prosopis fruit (pseudo Carob Tree). This tree, which the Spaniards will baptise algarrobo because of its similarities with the European carob tree, grows in the grassy plains of the southern pampas and in the forests of the humid northern pampas[2]. The Amerindians of the pampas know how to make a seasonal beer with the flour extracted from the carob bean. The making of a carob beer requires several preparatory steps before alcoholic fermentation is triggered. This historical example proves that peoples who had neither the cereals of their farming neighbours nor the starchy roots of the horticulturists living in the humid forests could brew beer provided they found an abundant and renewable source of starch in their environment.

The contribution of Amerindian beers to the spiritual realm (rites, customs, beliefs) is unfortunately not well known, due to the lack of descriptions dated from the 16th century, when the destructive impact of the Spanish colonisation was still weak. The rare testimonies on this subject date from the 18th century, when the Amerindian societies were either destroyed or fully destructured, with the exception of the Tehuelches, Ranqueles and Mapuche communities of Patagonia.

[1] In the 16th and 17th centuries, the shock and trauma of the Spanish colonization will upset the balance of the Amerindian peoples. The most advanced societies, the vast village communities of Upper Paraguay, whose economy was based on agriculture and livestock farming, were the most affected. Forced to disperse to escape the slave hunt organised by the Spanish, these Amerindian peoples will suffer unprecedented social regression. They will survive in small, more or less wandering groups, but their most complex social institutions will disappear. In the 18th and 19th centuries, travellers and geographers will describe them as primitive tribes, forgetting the deep historical causes of their so-called "state of nature".
[2] The northern pampas is covered with forests in the 16th century. The massive deforestation undertaken by the European settlers in the 18th century will transform the region into a grassy plain which the large landowners convert into an area of extensive cattle breeding, after having chased away or massacred the last Amerindian communities who had been living there for centuries.
Article 1 of 6 Farmers-brewers of the Rio Paraná and Paraguay 16th