The brewery in city-states and early kingdoms

The brewery in the heart of city-states and early kingdoms.

Neolithic agrarian communities grouped together in more or less permanent villages. Later, over the millennia, human groups founded larger settlements. The oldest have been discovered in the Near East, for example: Jericho (8000-7000 BC) in Palestine, Çatal Höyük (6500-5700 BC) on the southern edge of Anatolia, Oueili (6500-5500 BC) in the Euphrates delta.

At this stage, the village is growing in the middle of its agricultural territory. Inhabitants and farmers are, if not the same people, at least members of the same extended family entities. With the social and physical proximity of the farmer-pastoralists grouped together in the same village, the decision to devote grain to beer, to make the fermented beverage and to drink it collectively depends on those who cultivate, harvest, keep the granaries and form the same social group. Storage structures (granaries, silos, pits) are located in the centre of the settlement. These collective implements are not in all likelihood monopolised by any social group.

In this "egalitarian" context, signs of social differentiation appear (large buildings, rare objects, first ostentatious craftsmanship, funerary ornaments). The reasons and mechanisms are not always clear: demographic growth, extended exchange networks, economic specialisation of some settlements, surplus grains collected for the upkeep of non-productive groups, etc. Or a dynamic combination of these factors with local strategies?

Site of Habuba Kabira (Syria) seen from the bank of the Euphrates, with its mud-brick walls. This new city founded around 3500 BC illustrates the type of voluntary urban planning that appeared in the 4th millennium © DOG / Dr. Eva Nagel-Strommenger. 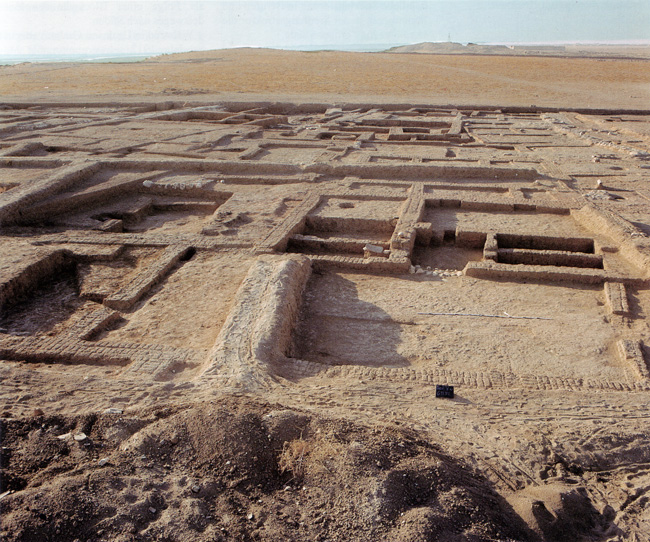 To this list must be added the technical acceleration that the brewery is experiencing. Beer was born before the appearance of the city-states. But the emergence and political rise of the latter have reinforced the role of beer as a fermented beverage based on grains. All these societies cultivate cereals on a massive scale. Everywhere, grains are used as currency for economic transactions and as a reference for social exchange. The brewery is carrying a technique to convert raw grains into a beverage with a high social potential. A fermented beverage for the political and religious elites, a beverage offered to the protective deities of the cities, a beverage-ration for the personnel who make these heavy and complex social constructions running.

Some cities grow and form at the end of the 4th millennium the nucleus of powerful city-states.

In China, the urbanisation phase in the middle Huang-He basin seems later (middle 2th millennium BC).

In America, the mayas city-states or the first Andean cities do not appear before the 1st millennium.

A city-state is a military, religious and commercial urban core supported by an agricultural territory which it defends and which in return guarantees its food supply. The city-state functions as a decision-making centre. A social and physical distance, or even a social division, is created between the political city and the population of farmers. This makes a fundamental difference compared to the social homogeneity and technical consistency within the village structure.

This protohistoric march towards city-states in some parts of the world involves two phenomena that have left material traces:

These two developments make it possible to follow the evolution of the brewery, according to the cultural areas, over periods of several millennia.

[1] The first city-states did not all invent the same techniques. The geography and their cultural developments differs.
The Amerindians do not need the wheel, but they do have an extraordinary activity of plant domestication. Half of the field crops and vegetables that feed the planet were brought back from the Americas. We owe their domestication to the invaluable skills of the Amerindian peoples.
One wonders whether the inscriptions in the Indus Valley are based on real writing.
The Chinese urban concentration along the Huang-He River and its tributaries does not seem to have been as strong 4000 years ago as on the banks of the Euphrates or the Nile. For example Erlitou (1900 to 1600 BC), Erligang (1700 to 1300 BC), or Xiaotun in Anyang province (1300 to 1050 BC approximately).