The 3 breweries of St Gall Abbey and beer in Carolingian times.

A 152-page study of Carolingian beers, brewing ingredients, the evolution of brewing between 750 and 1200 and the role played by the monks.

This study scrutinises the preconceived ideas about beers in Charlemagne's time in the light of documents from this period.

The program plan of St. Gall Abbey, drawn in the year 820, is a starting point for studying the role of brewing in the Carolingian economy. Beer was drunk by the laity and the clergy. Monks and nuns were officially allowed to drink beer since the Synod of Aachen in 816, and to brew beer within their abbeys. This is why St Gall abbey plan foresees one brewery to make the beer of the monks, one for that of the distinguished guests, and one for the "small beer" given to the numerous servants of the abbey, the paupers, the pilgrims and the sick.

Polyptichs, charters and cartularies complement this plan by providing data on the brewing of beer, the management of the many ingredients required for brewing, which are accounted in most details. These carolingians documents cover the economy of the abbeys and also the general organisation of the brewery on the scale of several agricultural estates, or even of an entire region such as the Meuse basin. These data enable us to outline the evolution of the social status of millers, maltsters and brewers, of their trades and their techniques. Initiated under the Carolingians, many deep social and economic changes led to the relative emancipation of the brewing trades around the 12th century.

This whole dossier is imbued with the atmosphere of a Western Europe in the midst of an economic and political boom that also stimulated brewing. We will be led to question the respective roles of the laity and the monks in the growth of the European brewing. What was the actual part played by the abbeys? Were the monks true innovators in this technical field as literature often repeats?

Under the Carolingians, an abbey was not only a refuge for those who wished to pray. An abbey also welcomed the mighty of this world. Equipping it with a hostelry, including kitchen, brewery, bakery, cellar, cowshed and stable was part of a political plan. Endowed with huge material advantages, abbeys were socio-economic and political power hubs in the Carolingian world. More than the palaces, the abbeys ensured a territorial meshing and a day-to-day political oversight of the vast Carolingian empire. The brewing facilities inside or around an abbey were not just a convenience for the nuns or the monks.

The ingredients for brewing beer are converging at the abbey gatesGallery of original images illustrating the study of the Carolingian brewery. Free of rights except "Jorg craft  master-brewer" (©hausbuecher.nuernberg.de/75-Amb-2-317-20-v/data) and "the Trossingen maple flask" (©Archäologisches Landesmuseum Baden-Württemberg). 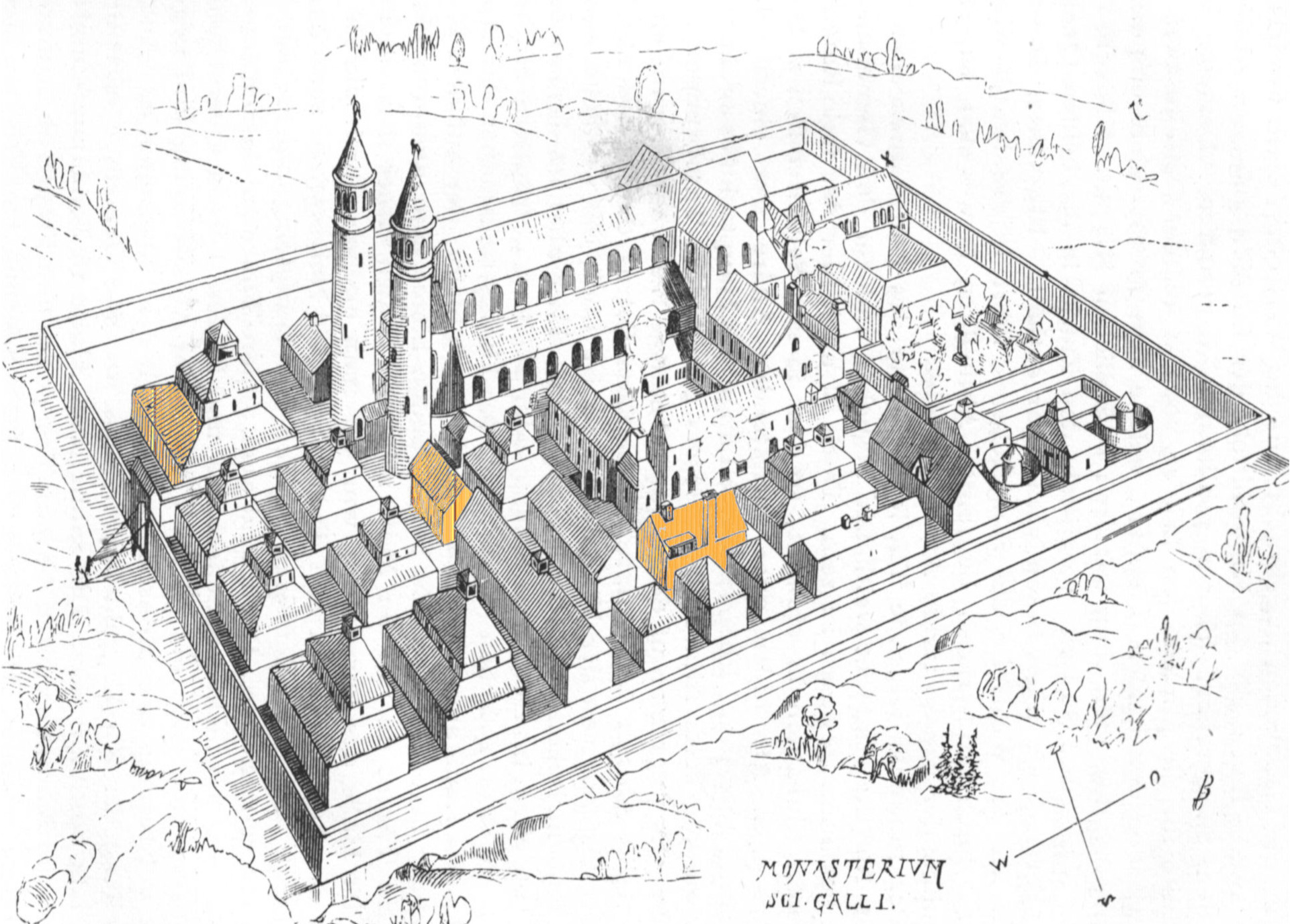 Programmatic plan of the abbey of St Gall (Switzerland) drawn around 820 by the abbot Heito. Three breweries are planned: for the monks, for the guests, for the paupers and the pilgrims. 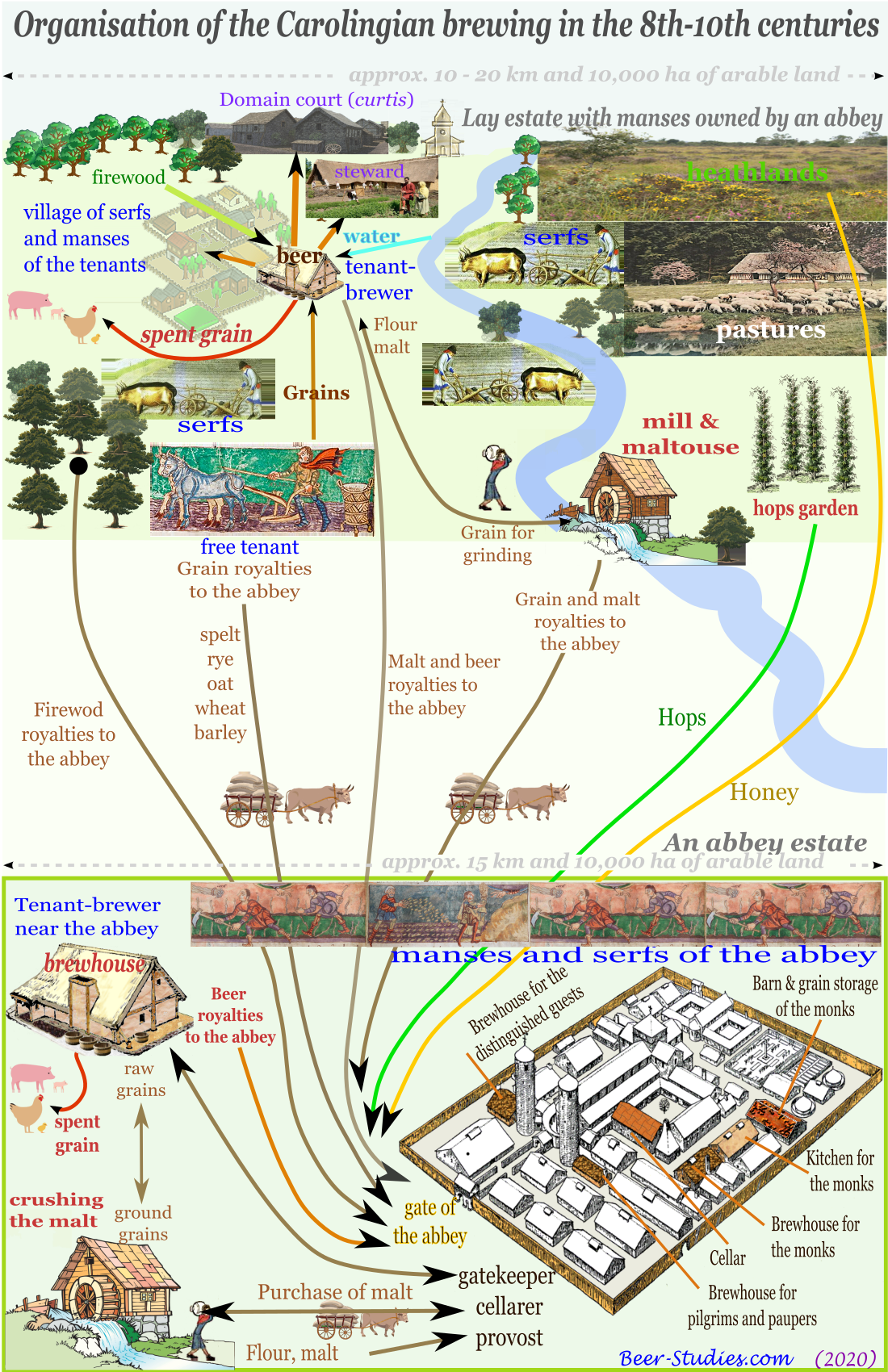 Economic organisation of the Carolingian brewery between several secular or abbot's estates around 800 - 1100. The ingredients for brewing beer are converging at the abbey gate.

Economic organisation of medieval brewing between several secular or abbey estates around 1100 - 1300. Rise of merchant towns and beer trade. 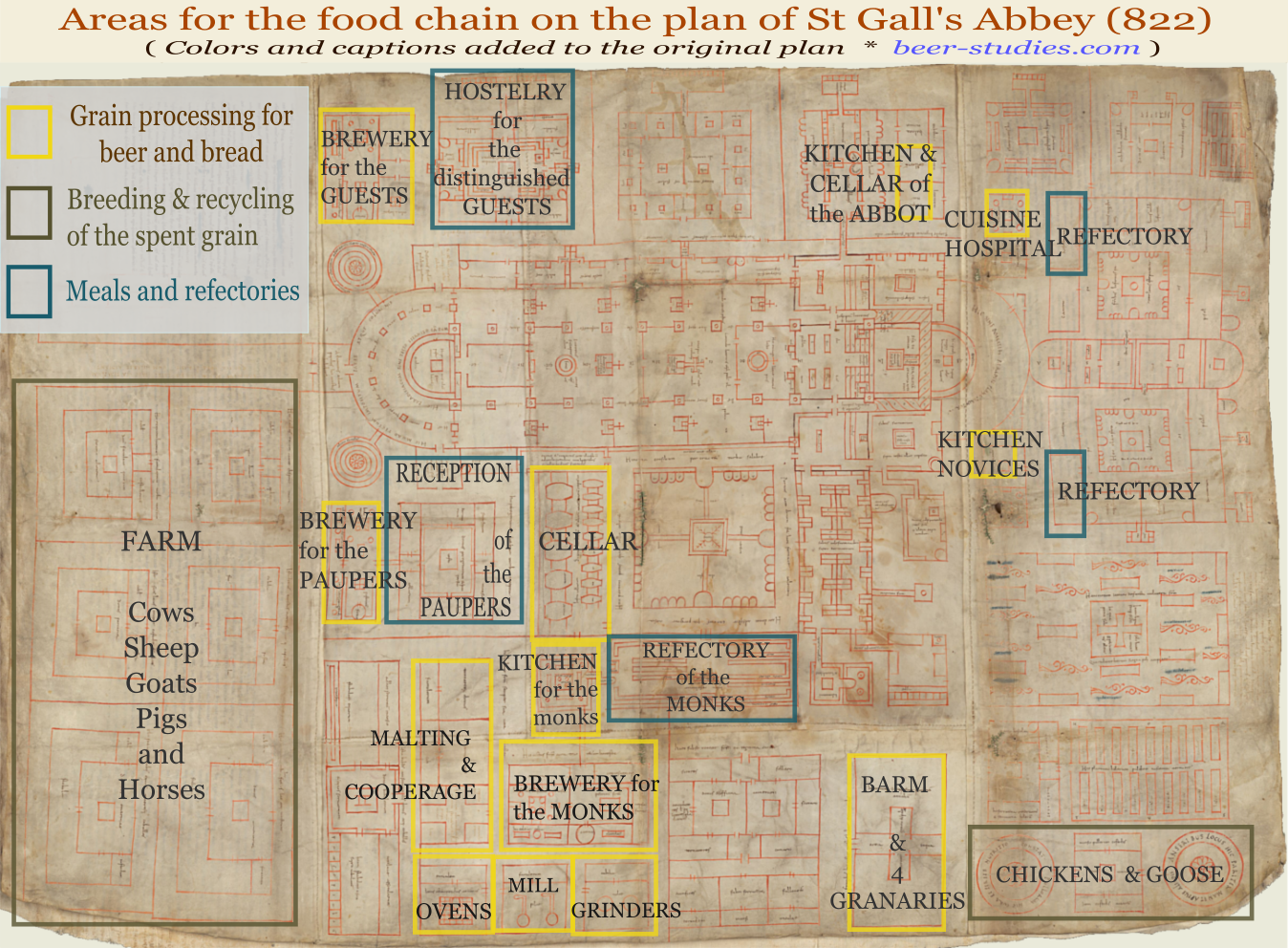 Plan of St Gallen. Occupation of the areas dedicated to the preparation of beer and food for all persons working, living or invited within the walls of the abbey.

Plan of St. Gallen. Organisation of the 3 breweries within the abbey. Flow of ingredients for brewing beer, the 3 brewing workshops, fermentation in the cellar and serving the 3 types of beer.

St. Gallen, the brewery ancillary buildings. Brewery for the monks, a malthouse, a mill and mortars, a cellar, a cooperage, etc. 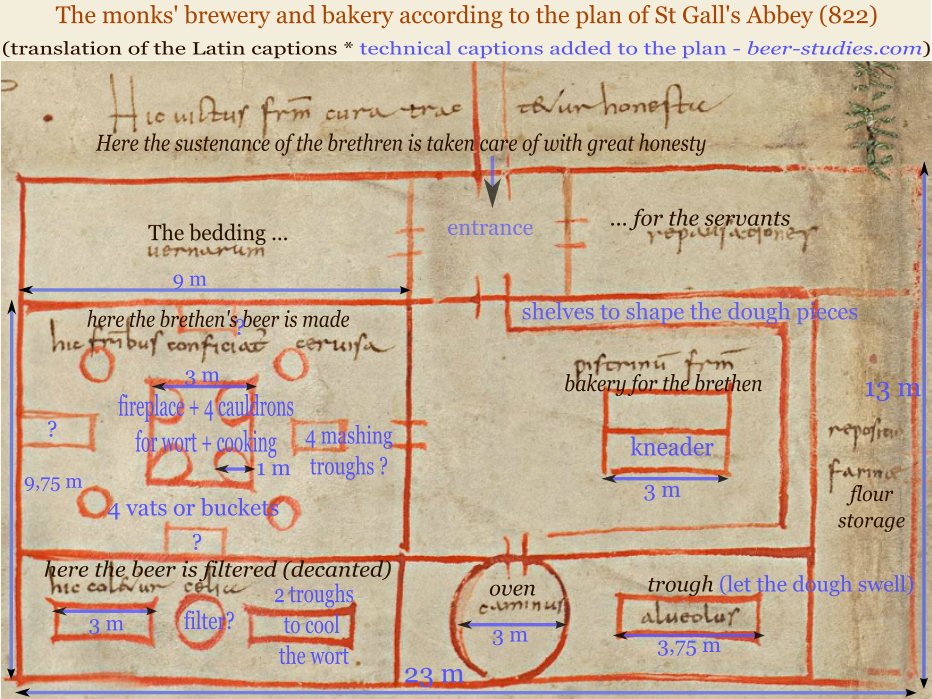 St. Gallen, the brewery-bakery for the monks, detailed plan. Apparatus for brewing grain, cooling and decanting the wort. 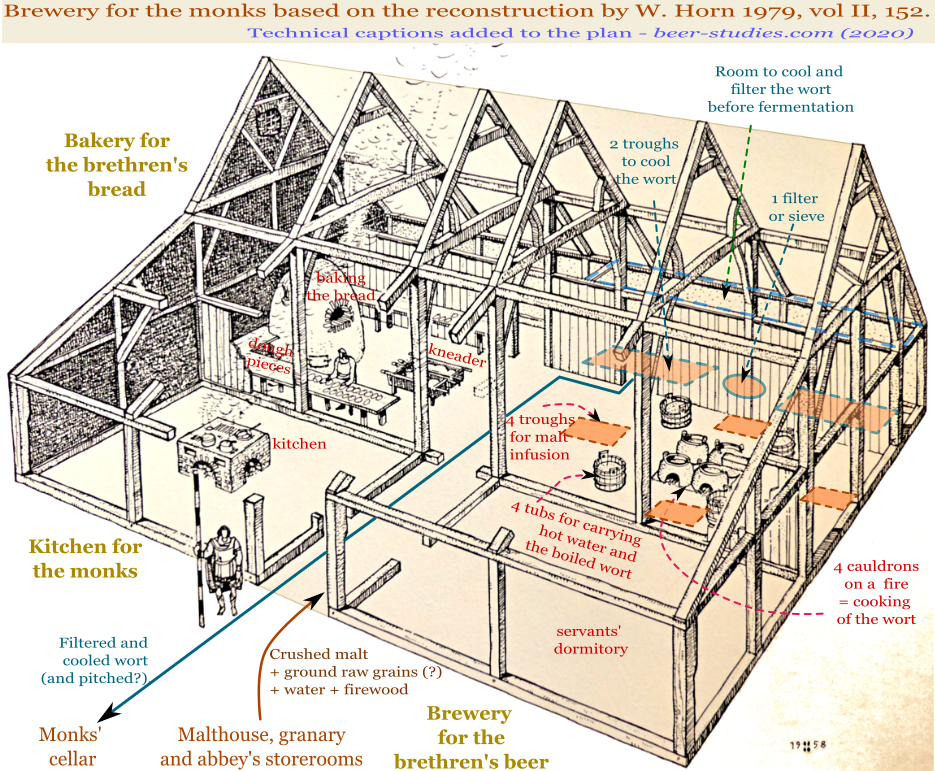 St Gallen. Reconstitution of the monks' brewery according to Horn 1979.

St Gall, the monks' cellar for the fermentation and storage of beer and wine. Large and small barrels with calculation of their capacity. 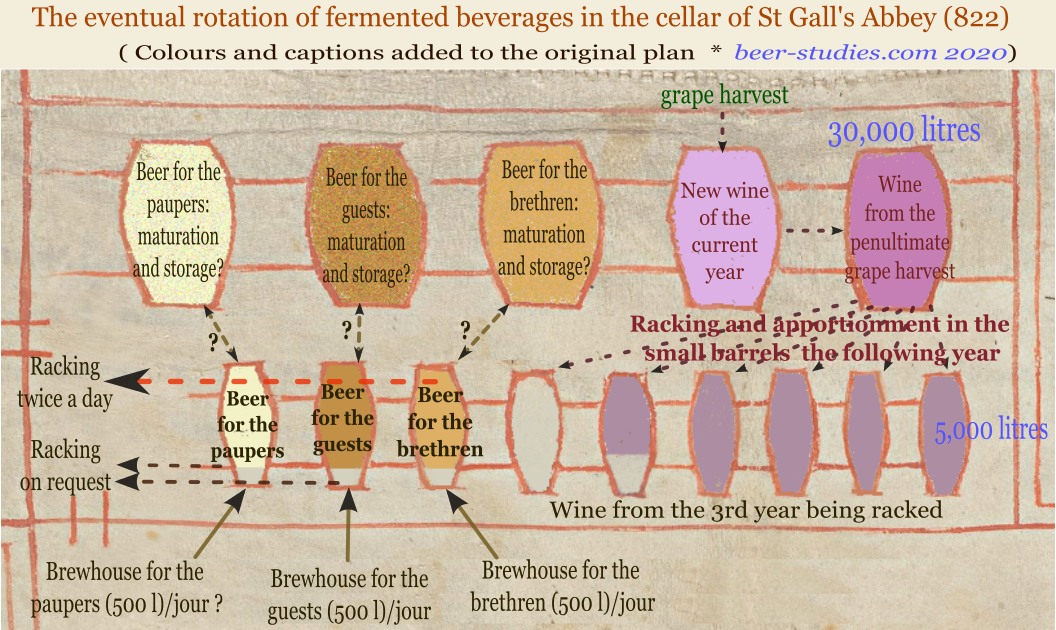 St Gall, the management and turnover of fermented beverages in the cellar barrels. Calculations based on the capacity of the barrels.

St. Gallen, the brewery and bakery for the guesthouse of distinguished guests. Its model is very similar to that used for the monks.

St. Gall, the brewery-bakery for the poor, the pilgrims and the sick. A smaller model not so well furnished.

Estates of the abbey of St Denis (Paris) in 832. Royalties owed in rye, malt and hop brought to the abbey from more the 90 km away.

Abbey of St Bertin (Northern France). Its estates owed malt between 844 and 859, some close to the abbey, others far away.

Deckers.Map of the breweries in the middle Meuse river valley between 800 and 1350.

Sketch of a rural Carolingian brewery. Brewing beer on the ground floor with troughs, tubs and a fireplace. Malting grain on the raised floor according to the plan of a domestic brewery discovered in Zutphen (Netherlands).

Jorg, a brewmaster who died in 1437 in Nuremberg, a lay craftman brewer, not a monk!
©hausbuecher.nuernberg.de 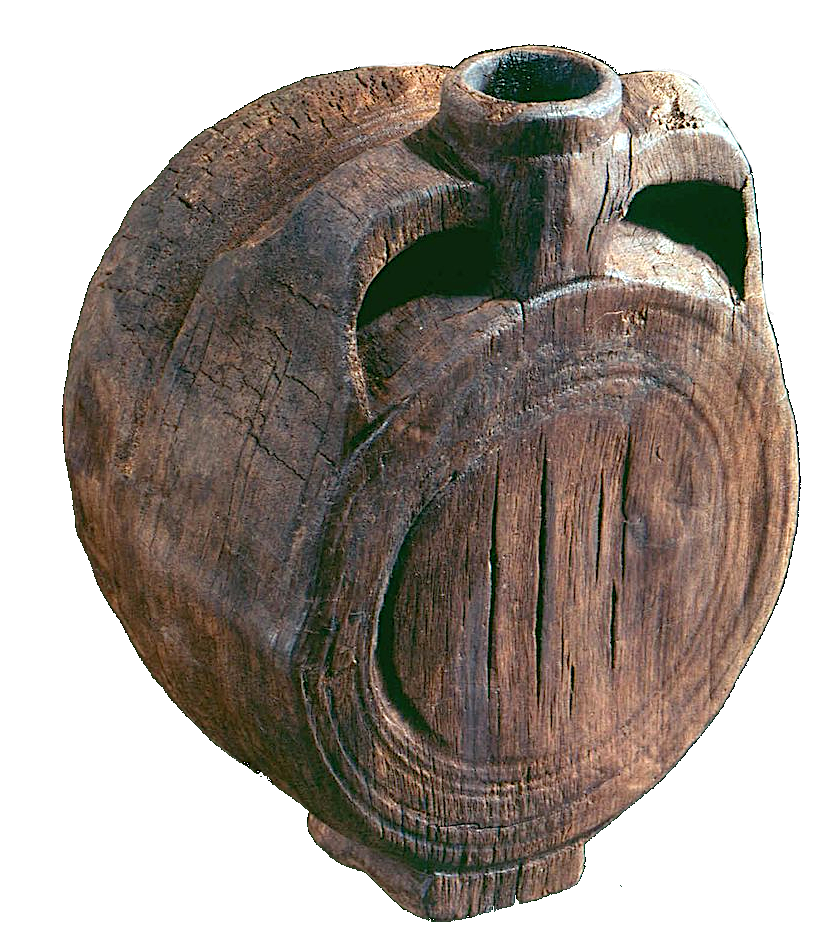 Trossingen, year 580. A maple wood flask with traces of honeyed beer with hops found in grave no 58. The land of the Alemanni, a people who long resisted the Frankish policy of Christianisation.

End of the gallery.